Development work is ongoing in the ISTLAB project on how to utilise bathymetric models designed for navigation. Underwater models enable us to obtain more detailed data on the seabed than previously known, to the benefit of pilotage and on-board navigation systems. 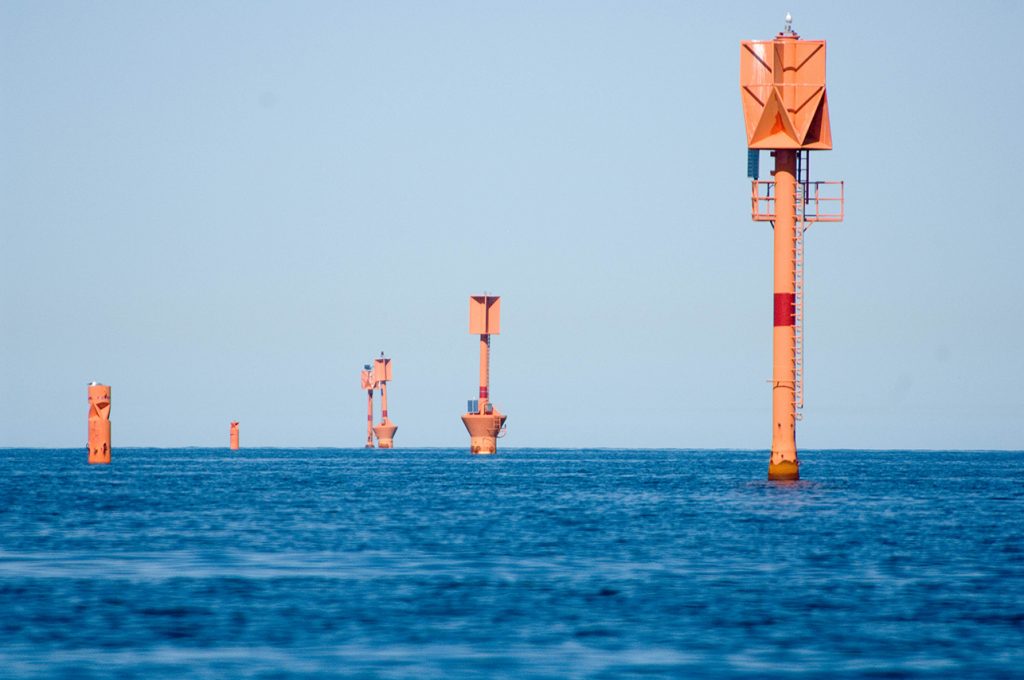 Extensive use of bathymetric models in navigation not only demands new types of equipment utilising e-navigation services, but also the seamless, general availability of different data. The bathymetric model of the Rauma fairway is utilised in the ISTLAB simulation system, in remote monitoring and pilotage.

In the ISTLAB project, the bathymetric model of the Rauma fairway area will be incorporated with local conditions and accurate positioning, as well as with the other intelligent fairway infra.

– By incorporating the bathymetric model with other data such as water level information and data on conditions, we can create new tools to assist decision-making. The purpose is not only to display the bathymetric models as such onto screens: they can also be utilised in the systems’ backend processes, says Stefan Engström, specialist at Traficom, the Finnish Transport and Communications Agency.

The bathymetric model in the ISTLAB is also integrated into the simulator system, thereby enhancing the simulator’s ability to handle the vessel’s hydrodynamics.

According to Engström, projects like the ISTLAB play an important role in the development of today’s shipping. In the project we are testing use of data and new technology, as well as learning how to apply theory in practise – the data obtained will also be forwarded on for use in international standardization work.

”National projects enable us to recognize the special characteristics and challenges of the area. On the global scale, such characteristics are for example the absence of tide, the archipelago, and dredged channels."

The nautical charts and assimilated products that are produced in Finland must comply with international standards so that they can be utilised by every vessel coming to Finland. In some countries the nautical chart institutes already publish bathymetric model products that comply with the international IHO S-102 standard, and which are designed for navigational use. No such products have thus far been published in Finland.

– Traficom has participated in international development work on the IHO S-102 standard and has created bathymetric model products for testing purposes, says Engström.

The new S-100 products are intended to be machine-readable, and it is likely that new ways of utilising them will be discovered, within digitalisation and automation.

– It will be some time before the bathymetric models become part of everyday work on a merchant vessel’s navigation bridge. Meanwhile bathymetric models can already be utilised, for example in the manufacturing process of nautical charts, fairway design and in other backend systems and services that support shipping, Engström adds.

From testing to practice

It is always a challenge to introduce new data to the navigation bridge. The information should be integrated efficiently into the existing environment in such a way that it is presented to the user in a more condensed manner than before. Less is more.

– The challenge is to increase the amount of data, but without overloading the user, says Engström.

”The aim is also to carry out bathymetric model trials and utilise them on a broader scale in cooperation with interested parties in different projects.”

In Finland we are aiming to create bathymetric models for pilotage of the merchant shipping lanes. According to Engström, bathymetric modelling requires relatively fresh hydrographic surveys of the area.

– It is not likely that bathymetric models will be widely available in the next few years, but the aim is to carry out bathymetric model trials and utilise them on a broader scale in cooperation with interested parties, in different projects.

ISTLAB - contributing to the future of bathymetric models

Maritime professionals of the future will be required to have a new type of knowhow and adopt a new way of thinking. As the role of technical aids and digital data gains importance, the user’s ability to make efficient use of that data is also more important than before.

– National projects enable us to recognize the special characteristics and challenges of the area. On the global scale, such characteristics are for example the absence of tide, the archipelago and dredged channels.

In the future, greater demands will be focussed on a seafarer’s understanding and interpretation of digital data.

– System user friendliness and the users’ skills should be in balance. The question of how this balance will be achieved is one of the questions for which solutions are expressly being researched in the ISTLAB project, Engström adds.